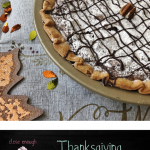 For my Friendsgiving this year half the dessert was set.  My oldest daughter made an apple pie at school last week so that was a done deal.  But I felt we needed something else.  Something a little less traditional than the usual apple, pumpkin, pecan fare.  But still with a nod to those classics.  They’re classic for a reason after all. 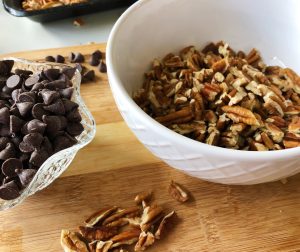 And that’s when the Kentucky Derby popped into my head.  I know what you’re thinking, what’s the connection between the Derby and Thanksgiving?  But go with me for a sec because there was a connection in my thousand mile a minute mind. 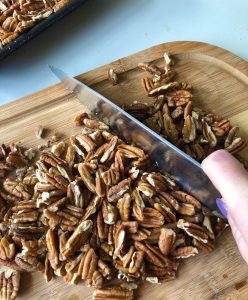 Right after law school I lived in Louisville for about a year and worked only a few blocks from The Brown Hotel (a Louisville institution and famous for, among other things, it’s invention of the criminally underappreciated Hot Brown sandwich)

I went there for lunch with some co-workers one day and that’s when I first encountered Derby Pie.  One bite and I was immediately indignant that I’d made it to my mid-20s before discovering this pie.  Why had no one told me about this delicious creation before?

For those who haven’t had a Derby Pie : first, my condolences.  I don’t know who hid this from you, but you’re missing out.

Let me remedy that and make the proper introductions.  Derby Pie, reader.  Reader, Derby Pie.  Derby Pie is a dessert traditionally served during the Kentucky Derby.  It could be described as a pecan chocolate chip cookie in a pie crust but that sells it short.  It’s rich, it’s chocolatey, it’s ooey-gooey its amazing with a little whipped cream or vanilla ice cream.  But what puts it over the top is the bourbon. 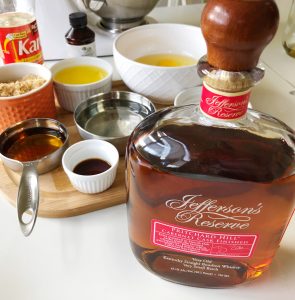 Bourbon is to Louisville as wine is to Napa.  The area is surrounded by bourbon distilleries though everyone has their favorite bourbon.  In Louisville, bourbon is in the drinks, it’s in the food, and a whiff of it’s oaky caramel scent can often be caught in the air.

Fun fact: When I was pregnant I didn’t have many strange cravings – food or otherwise.  The only one that stands out is that I loved, even craved, the smell of bourbon.  I used to have my husband order a bourbon on the rocks just so I could sniff it like some sort addled kid with a bottle of white-out.  But I digress. 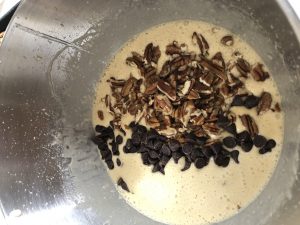 In this dessert you add bourbon to the batter and then mix in pecans and chocolate chips. 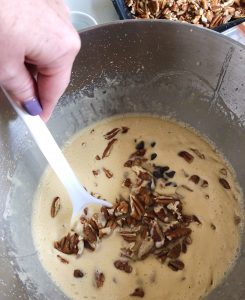 After that, prepare a 9-inch pie tin lined with pie dough.  To keep my Friendsgiving simple, I used a store bought one but if you have the time to make dough from scratch do it.  Go wild. 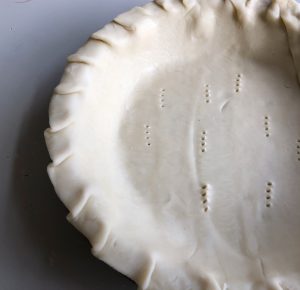 Then you’re going to prick holes in the crust with a fork and blind bake it with pie weights or beans in a pinch.  If you have a pudgy two-year old around, like I did, let them put in the baking weights in.  It makes for a cute picture and distracts them from whining for a hot second. 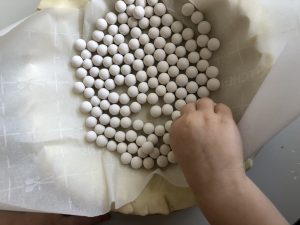 After the crust is blind baked add the filling mixture.  Inhale the delicious wafts of bourbon that emanate from the pie.  Mmm, bourbon. 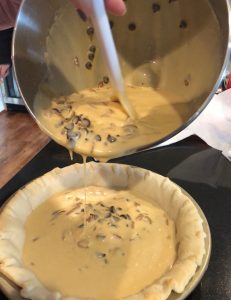 Once baked and cooled, Derby pie is the perfect twist on a holiday classic – pecan pie.  Told ya I’d make a connection between the Derby and Thanksgiving.  Took me a while but there it is.  Make the pie, eat a slice and then tell me how brilliant I am for connecting the two.  Go ahead.  I’ll wait if you give me a bourbon on the rocks to sniff. 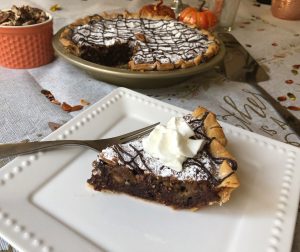 You’ve had pecan pie, you’ve probably even had chocolate chip pecan pie but have you had Derby pie?  It blows those other two out of the water.  If you took a chocolate chip pecan pie and got it drunk this is what you’d have.  The hint of bourbon cuts the sweetness of the chocolate chips and the filling batter.  The crunch of the pecans along with a flaky pie crust give it an unbeatable texture.  Served with whipped cream or a scoop of ice cream this pie can more than hold its own on any holiday table.