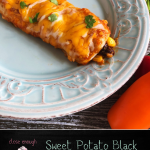 I came up with this recipe for Sweet Potato Black Bean Enchiladas because of something that happened about five years ago (oh how time flies!).   That’s when my husband became a vegetarian.  Or more precisely a pescetarian.  So he eats fish but no other meat.  To this day he swears that it was the picture below that made him swear off meat.  In case it’s unclear, it’s a picture of my girls feeding a calf at a local dairy farm.

Plus, wanna know what I think when I see this picture? “Damnit, I never should have taken the girls to that dairy farm.”  (And also, that calf is cute and all but I’d still eat it.)

It’s not that I’m heartless. Or don’t think my girls are cute.  Of course they are.  Especially in pictures when you can’t hear them whining and complaining . . . .

It’s just that my husband becoming pescetarian has caused a ton of extra work for me.  I know it makes him healthier and he’s likely to live longer, blah, blah, blah . . . But it’s pain for me! (insert whiny voice)

If I’m making anything meat-related for dinner I have to think too about what he will eat.  One man can only eat so many veggie burgers. Trust me, I’ve tested his limits.

So I’ve become pretty adept at making meals that easily work both with and without meat.  Which is how these sweet potato black bean enchiladas were born.  They’re tasty, super easy to make and awesome as a lunch left over the next day.

When my kids want beef or chicken enchiladas for dinner, I pull this recipe out and make half meat, half sweet potato black bean.  Happiness all around.

This is my favorite kind of vegetarian dish.  First, it doesn’t try to disguise the vegetable or pretend to be something it’s not.  I’m looking at you soy crumbles.  Not. Buying. It. This dish? It puts the vegetable front and center.

Second, it doesn’t feel like a side dish masquerading as a main course.  Nope.  With the addition of sweet potato and black beans, these enchiladas are substantial enough to stand alone. Though I usual pair them with some refried beans and whatever fruit/veggie my kids are willing to eat that week.

Finally, as is generally the case with my weeknight meals, these enchiladas are super easy.  Chop some sweet potatoes, onions and red pepper.  Open a couple cans.  Throw in a few spices.  Boom, dinner.  A perfect easy vegetarian meal for those who don’t eat meat or even someone just trying to incorporate more meat-free dining into their lives.

If you’re feeling wild make two pans of them and freeze one.  Trust me, next week when you don’t have the energy to cook, you’ll thank me.

A perfect meat-less weeknight dish for when you’re craving Mexican but don’t have much time to cook.  It’s packed with veggies, spices and slathered in sauce and cheese (yum)!  Any vegetarian in your life will be happy to be served this dish and even meat-lovers will be won over by the flavors.  Pair it with refried beans and fruit or salad and you’ve got a complete meatless meal in about a half hour.

*If you’re one of those people who hate cilantro then leave it out. The enchiladas will still be tasty.

** You could also make your own enchiladas sauce.  Additionally, since I prefer my enchiladas a bit saucier (not sexy, just with more sauce) I will often buy a 28 oz. can and use 2/3 of it but that’s just a matter of preference.

*** Be careful removing foil as steam will vent out.