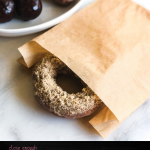 I know, I know. We should all start the day with a healthy breakfast. But sometimes it’s the kind of morning that calls for a strong cup and coffee and a warm, fresh donut.

When I was a kid, my mother tried hard to limit the amount of sugar my siblings and I ate. This applied especially to breakfast where she had a rule that we weren’t allowed to buy any cereal with over 10 grams of sugar. Which pretty much limited us to Cheerios. Plain cheerios. Plain flavorless Cheerio.

I had a rough childhood. I know. No need to pity me.

There was only one exception to my mother’s breakfast dictatorship — Family Vacation. When we were on vacation we could get whatever we wanted. Sugar be damned! Bring on the Fruit Loops, Lucky Charms, Pop Tarts!

My choice breakfast splurge was nearly always Entenmann’s Crumb-Topped Donuts. God, I loved those things. What they lack in flavor and texture, they more than made up for with their over-whelming (borderline gross) sugariness. Exactly what I was jonesing for.

So I set a goal for myself. Could I make home-made crumb-topped donuts that could rival the Entemann’s ones? You know, but with actual flavor and way, better texture.

With these donuts, I think I nailed it. Granted, my topping isn’t in the shape of rat-poison like pellets, if you’ve eaten of the Entenmann’s version you know what I’m talking about, but otherwise nailed it.

These donuts are flat-out addictive. They start with a simple cake donut batter. Personally, I prefer cake donuts to yeasted ones.

Next, you’ll roll out the dough between two pieces of parchment paper and put the dough into the freezer to chill. While the dough are in the freezer, you can pull together a simple glaze and the brown sugar cinnamon crumb topping.

Once the dough has chilled, use two round cookie cutters to cut out each’ve donut.

Side note/Pro tip: Once you’ve finished making the donuts, fry up some donut holes using the middle part of the donuts you cut out. Glazed, covered in chocolate or simply coated in cinnamon sugar, they’re yum.

After the donuts are fried for a couple minutes on each side, they’re put on paper towels to cool while the paper towel absorbs any excess oil.

Once the donuts have cooled a little (but are still warm), dip them in the glaze, turning over to coat.

Immediately after dipped in the glaze, place them on a cooling rack and cover with crumb coating.

What you end up with is ten year old me’s version of heaven. An airy cake donut with a light glaze and an amazing crumb topping.

Just promise me you won’t tell my mom I ate one.

These crumb-topped donuts will take you right back to childhood. A lightly fried cake donut covered in glaze with a crumble topping. So delicious and simple to make, you’ll never go back to the store-bought version.

** Save the pieces of dough that are cut out of the center of the donuts. After donuts are finished frying, these can be fried (less than a minute each side needed) and coated in plain glaze, chocolate glaze or anything else that appeals to you.

*** I keep leftover chopsticks and use them to flip donuts in oil and remove from oil.  A slotted metal spoon and spatula can also be used.

****Since the flour is being added to the donut after baking, cooking it beforehand ensures that the flour is safe to eat in the unlikely event it contains any bacteria.