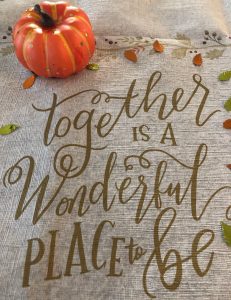 I come from a big Irish Catholic family that is many things.  Loud and opinionated.  Funny storytellers. Enthusiastic drinkers (some of us maybe too much . .).  But by and large we’re not the best cooks and most aren’t even all that interested in cooking.  I’m the exception that proves the rule.

Growing up, there were no recipes handed down through the generations.  Grandma never brought over her blue ribbon side dish.  On the contrary, when you went to her house for dinner it was best to eat beforehand.

And my mother is amazing — she’s charismatic, driven, a force to be reckoned with — but she has always viewed cooking as a chore not a source of enjoyment.

One of the few recipes that I consider a family tradition is this one.  We make it every Thanksgiving and Christmas.  So it’s something I look forward to every year as the leaves fall and the weather turns cold.

This cranberry apple cider stuffing is super tasty.  If you took the flavors of fall and mixed them into a stuffing, this is what it would taste like.  It’s not fussy or complicated.  The add-ins are deceptively simple — onion, celery, cranberries, apple cider and sausage.  That’s it. 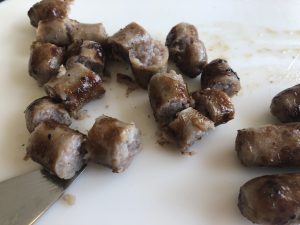 First, cook the sausage and cut it into bite size pieces.  Dice an onion and some celery, then cook it in the fat from the sausage. 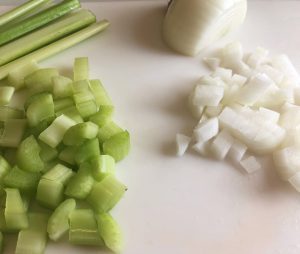 Combine the stuffing with a can of cranberry juice and some apple cider.

Then add in the celery/onion mixture, sausage and dried cranberries.  And voila – a side dish that is sweet from cider, tart from cranberries, crunchy on top and moist within, and umm, yummy from the sausage?  Mmmm, sausage.  Though it’s still delish without it – that’s how I make it for my vegetarian husband.

There you go.  That’s it.  The sum total of my family’s holiday cooking traditions in a baking dish.  Be thankful I didn’t give you my grandmother’s recipe for Irish Soda bread.  It’s basically a rock masquerading as a quick bread.  I still have nightmares.  For real. 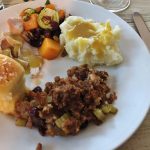 A family tradition — no idea where it came from or who made it first — that combines some of the best flavors fall has to offer in one tasty side dish.  It’s sweet, tart, and savory all at once.  It’s the perfect compliment to save any dry turkey or hum-drum holiday meal.  Tastes excellent by itself or topped with turkey gravy,

14 oz. bag of stuffing (I use Pepperidge Farm Herb Seasoned Classic Stuffing but any will work)